The previous posts on the goings on at Rothesay Harbour are to be found at these links:

The request for internal audit to investigate the council spend on defending the action by Calum McMillan is available again here: request-for-an-internal-investigation-into-the-possible-misuse-of-council-funds

This straightforward request was rejected with the following words:

I refer to your recent correspondence requesting a special investigation into the possible misuse of Council monies.

As you aware, Internal Audit is concerned with matters of governance risk and control and must remain free from interference by any element of the Council, including matters of audit selection, scope, procedures or report content. I wish to advise that having undertaken a scoping review of the issues raised in your request, it is my opinion that there are no grounds to initiate a special investigation with regards to governance, risk or control.

Officers have delegated authority to make decisions whether to defend any action raised against the Council. These decisions are based on professional opinion and judgement, and in this particular case external legal advice which supported the internal advice that the action should be defended.

It is accurate that legal costs (£145k) exceed the proposed settlement offer of £50k payment and £50k berthing fee credit which are outlined in your request document. Officers have indicated that the default position remains whereby the Council will defend any action raised against it where there is a favourable chance of success. As with any business decision where the outcome is not certain there are associated business and financial risk however it is my opinion that there is no material weakness in the approach taken.

I have copied Kirsty Flanagan Head of Strategic Finance, Martin Caldwell Audit Chairperson and David Mconnell Audit Scotland into this communication for their information.

As it turns out, the email ID used for David McOnnell of Audit Scotland was incorrect so I replied to the above as follows, copying in the controller of audit at Audit Scotland, Fraser McKinlay and our MSP Michael Russell:

It will be no surprise that we disagree. We would not have asked for this to be done had we thought officers acted reasonably and had taken best risk practice into account. It is our view they acted unreasonably and recklessly throughout and in so doing exposed this council to greatly increased risk, both financial and reputational.

I now make a formal request to Audit Scotland to investigate this matter. Audit Scotland already has a significant amount of information on this case, a good part of which came from a meeting some time ago between Audit Scotland staff and Mr McMillan’s solicitor.

I then followed this up later with the following:

The behaviour here at all levels, right up to and including the former chief executive, was utterly disgraceful and there is not a single council tax payer in Argyll & Bute who, if they knew the facts, would think otherwise.

Cllr Bruce Marshall chipped in too, as follows:

I have been acquainted with this issue going way back to I am sure it must be about 2006 or 7 and have always thought that Mr McMillan was being badly done to by the Council and that there appeared to be some sort of vendetta being perpetrated against him for some reason or other.   The time and effort put in by senior and junior officers of the Council over that long period must have been immense.

You’re right Bruce and much of this well predates my time as a councillor. It’s time to give you this little gem which came from the email archives via an FOI by either Mr McMillan or his solicitor. It kind of says it all really.

The harbour board is supposed to be the decision making body but here we have an officer saying councillors will be told what to do. This appears to make this officer think that banning a customer’s vessel from the harbour is worthy of a nice bottle of wine. Vendetta? What vendetta?

Trebles all round as Private Eye might say. I am sure this would qualify for insertion in their Rotten Boroughs page.

The little gem referred to was this: 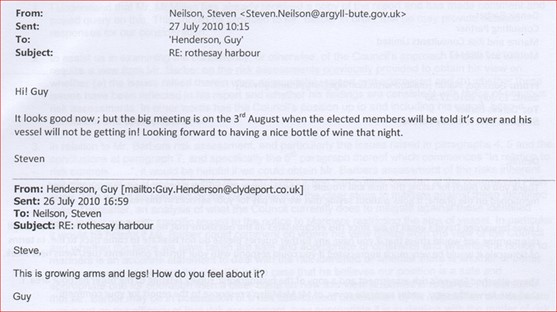 There was further correspondence on this, all of which had Audit Scotland copied in. As of today, there has been no response from Audit Scotland.