My first post on the ADP can be found here. This is an update.

Cllrs Armour, MacDonald, MacLean, Strong, Blair and myself were unhappy with the response we got from officers for the following reasons:

Even if I had no questions at all about the tender, there are other aspects of what has happened here that are impact negatively on the Argyll & Bute economy. When a large national organisation wins this kind of contract, some of the contract value is syphoned out of the local economy to contribute to the overheads of the organisation and to its profits. Worse, there is a loss of skilled jobs in the local area because the management and administration of the contract will most likely be carried out  by people employed somewhere other than Argyll & Bute.

My last point relates to what has happened in Dunoon. The former staff of the local drugs and alcohol organisation, Kaleidoscope, have mostly been taken on by Addaction. So far, so good but what has also happened is that when Addaction took over Kaleidoscope, they took on Kaleidospcope’s assets and liabilities. One of those assets is Dunoon’s oldest building, Ballochyle House. Before the takeover, I tried to persuade Kaleidoscope’s chair that this was a dangerous and unnecessary move and asked if, instead, they would transfer Ballochyle House to another locally based charity for the sole purpose of using the building for addiction work. This would still have allowed Addaction to use the property and any successor contractor. If Addaction lose this contract for any reason, they will still own this asset and there may be no premises readily available for addictions work. This is a shameful position to be in.

I remain deeply uncomfortable about this whole process and we will continue to ask questions of officers in order to ensure that the public interest is served. Right now, it doesn’t pass that public interest test. 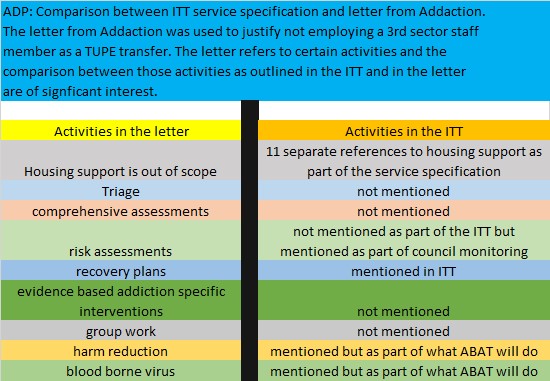 Questions asked by councillors, plus reply, plus further questions as of 3 August 2015. This is worth reading to understand the extent of our concerns. As of today, 9 August, we have not had a response.

questions re ADP as of 3 August